There are about 100 different types of glass frogs, although some sources say more than that even up to 120 of the species.  Most of them are a shade of green like lime green, but some of them have an underbelly, or abdomen, that is actually transparent, which means that you can see through it.  This means that it is possible to see the liver, heart and gastrointestinal tract of the glass frog through its skin.  This is fascinating because it is possible to see the little heart pumping, and then the food passing through the gut of the creature.  Not all glass frogs have this 'glass' effect abdomen though, and looking at them from above, they mostly appear to be lime green.

This frog is a tree frog, and they are arboreal, meaning that they prefer to live in trees and climb and can be found in the rain forests.  They hide away when it is raining heavily as they are so delicate with their very thin skin and it has been seen before that a single heavy raindrop is enough to kill a tiny glass frog.

They are quite small and grow to about 20-30mm in size.

The glass frog likes to eat soft insects and spiders.  It is a carnivore.

They are nocturnal creatures and are most active between the times of day of dusk and sunrise.

They are also a territorial breed and like to protect their own space.  They do this by calling out and letting other frogs know that this is their space and to not intrude.

So if a male frogs sounds his call and another male approaches, this will end in a fight as the male will defend his territory fiercely. When the winning male pins the losing male down and then releases him, the winner will stay where he is and the other will leave.  This is quite some wrestling match.

The glass frog's transparency allows it blend in nicely with a leaf which it might be sitting upon and this will help protect it from predators.

The predators of the glass frog include birds and snakes. 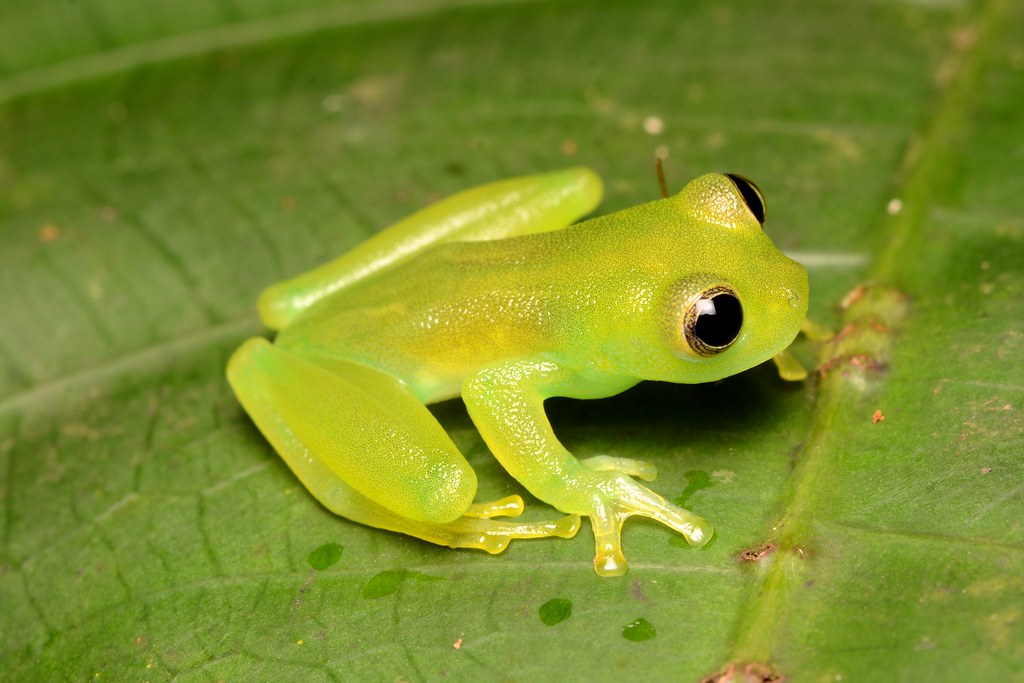 "Spiny Glass Frog" by amdubois01 is licensed under CC BY-NC 2.0

When the glass frogs mate, first the male will call to the female.  They will mate on the leaf on which they sit during amplexus.  The female leaves her eggs on the leaf and the male will protect the eggs.  Another female might come along and the same process will happen again. Then eventually the eggs hatch into tadpoles and they fall into the water where they then become froglets.