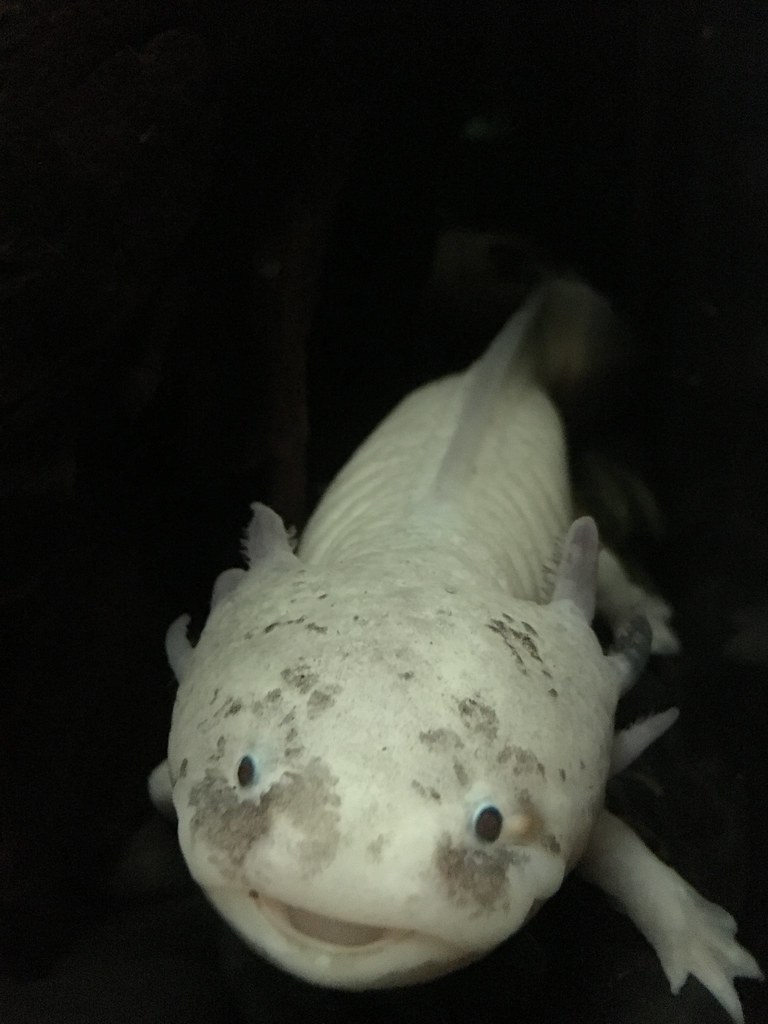 "axolotl" by Iñaki RT is licensed under CC BY-SA 2.0

The Axolotl salamander lives its life mostly in larval stage which is known as neoteny,or juvenilization.  That means that most of them achieve sexual maturity without outgrowing their juvenile state, sort of resembling a giant tadpole with a long body and dorsal fin for the majority of its life.  They are typically dark brown or black in color, some are a mottled color and some are white and there are also albinos.

The Axolotl classification is that of amphibian.  It's lifespan is approximately 10-15 years.  This wonderful and weird amphibian was always used to being the top predator in the wild in the lakes of Mexico, but since the introduction of large fish into its natural habitat, they are beginning to suffer a decline in population, this decline is also due to urban sprawl and pollution.  They are also preyed upon by large predators such as herons, in the wild.  They are only found in the wild in Xochimilco, a big lake complex in Mexico.  Sadly, these unique amphibians are listed as critically endangered in the wild.

The axolotl diet consists of mollusks, crustaceans, some fish and worms.  They don't have teeth to speak of - they are just tiny and do not have the capability of piercing or chewing their food, and tend to swallow their food whole.  So the way they eat their food is by opening their big mouths and sucking in their prey - so anything can get pulled in! They can get quite aggressive in tanks with other axolotls and they have been known to peck at each others gills and limbs, so it is best to keep the adults away from thebaby axolotls - they can be kept separately.

Breeding axolotls do not stay with a mate for life as it were.  They will breed with any axolotl that comes along, be that an old partner or a new one.  The male axolotl will deposit sperm packets on to the ground and try and coerce the female towards them and see if she will accept them.  If the female wants to accept the male axolotl sperm, she will settle on it to absorb it in.

It may be that she does not want to accept it and will swim away from it whilst he tries to lead her towards it again. This ends up being somewhat of a mating dance/ritual.

The axolotl eggs arrive in vast numbers - like to the tune of about 1,000, resulting in many births during a breeding season, which incidentally can be at any time of the year, but mostly seems to be the early part of the year.  Lots of the axolotl eggs however will not reach as far as hatching.  The axolotl eggs will take about 14 days to hatch, if they are kept in a maximum temperature of 25 degrees Centigrade, and if at a lower temperature of around 18 degrees Centigrade wll take about 20 days to hatch.  The females, once the eggs are fertilized, will go about laying her eggs on plants if they are there, or rocks and they will hatch from there.  The eggs should be removed from the tank if you are hoping to hatch them, or the adult axolotl removed, as the mother has been known to eat her own eggs.

If you are considering breeding axolotls, remember that there are many eggs that are potentially going to hatch and this can result in multiple tanks being required as axolotl tank mates are few and far between - they are quite solitary and certainly do not like being in close quarters with others that can access their food store.  This can rapidly result in axolotl cannibalism - where the babies will literally eat each other if they become hungry.  Also, mother axolotls would not mind eating their own babies in an act of cannibalism, should they feel like it.

In terms of axolotl care, if you are keeping them in a tank, they like temperatures of around 60 - 64 degrees Farenheit.  So you probably do not need to use a water heater. They like their aquarium to be cool-ish and dark-ish - no bright lights required.

A pet axolotl is not particularly affectionate.  They are amphibians that are mostly to be kept in the water.  They can be picked up, they might peck at you but it wouldn't hurt as their teeth are so small, but generally speaking the pet axolotl should be kept in water, as although it is termed an amphibian, it does live most of its life in the neotenic state, meaning it has not evolved into a full amphibian state that would allow it to wander about on land, and to allow it to do so would be harmful for it.  It is likely to grow to be around a foot long, and so your axolotl tank should be large, with plenty of room for it to move around in.  They are nocturnal in the wild, so ideally should be as pets too.  They have weak eyesight and hunt using their other senses.

Axolotls... and their regenerating limbs

An incredible fact is to be told about these creatures. Have you ever heard of axolotl limb regeneration?  Basically, these clever amphibians have the ability to regrow limbs lost.  The process for this regeneration is around about one to two months.

When they lose a limb, the cells that are close by actually convert to stem cells and are capable of growing back the limb or body part that was damaged.  This is quite miraculous.  Also, the limb regeneration is not limited to one time only, they can achieve this multiple times, even growing back part of the front of their brain, though the regeneration is not unlimited and in tests has been shown to have regenerated up to five times and then stopped.  Scientists are using the axolotl in their research to see how this might be able to help humans going forward into the future.