The frog's urogenital system is a combination of the reproductive system and the excretory system of a frog, combined.  So basically, the two usually separate systems are all a part of one and the same systems within a frog.

In frogs, the urogential system opening is where all bodily wastes AND reproductive fluids are expelled from the frog.  The frog's urinary system consists of the kidneys, bladder, ureter and cloaca.  The ureter is connected to the kidney and waste travels through that tube to the bladder, where it is stored until it is eventually passed out through the cloaca.

In the male reproductive system, the organs involved are the testes, sperm ducts and cloaca.  The testes produce sperm, and these are transported along the tubes known as the sperm ducts and into the cloaca and then out of the body of the frog. 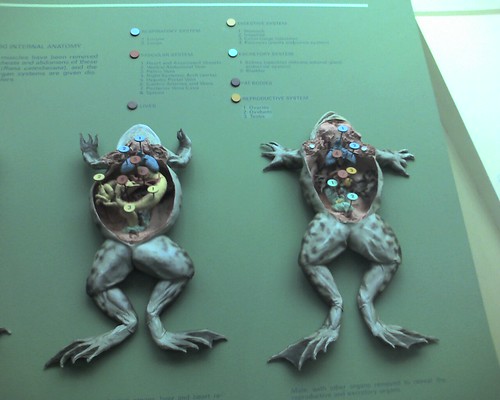 The frog's bladder is exceptionally strong, and it has been known for them to be able to hold vast amounts of waste fluid in their bladders.  It has even be known that foreign bodies that have gotten inside the frog, have somehow ended up in the frog's bladder, presumably passing through the frog urogenital system.

Frogs have two kidneys in place in their urinary system, the kidneys filter blood and excrete excess water from the frog, via the ureter to the bladder.  The cloaca in male and female frogs, expel both solid waste and urine out of the frog.

It is actually pretty hard to tell the difference in frogs whether they are male or female.  This is because in frogs the sex organs are located internally and not externally.  The usual way that you would be able to tell if a frog is male or female by looking at it, is that the male tends to be smaller than the female.  Another difference would be that the male has these kind of swollen looking pads on their front limbs called 'nuptial pads', which they use for clinging on to the female during the breeding season.  And another way to be able to tell if the frog you are looking at is male or female is that if it is calling out, it is likely to be a male.  The male frogs tend to call out to attract a female.