Toad in the hole recipe 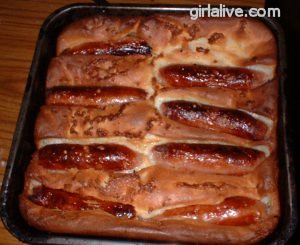 The toad in the hole recipe is a quirky name for an old-fashioned, but still very popular, English dish.  It dates back to the 18th century and has been mentioned in various cookbooks of the times, but did get the accolade from Mrs Beeton of a homely and savory dish! A huge accolade indeed.

It is not very clear where the name came from, but it could be that it was because of the way toads would peak their heads out of a hole while they were waiting for their prey to pass by.  So it is with sausages, which is the meat traditionally used in this recipe.  As you cook the batter, with the sausages lying in it, the batter rises around the sausages when it is cooking in the oven, and the sausages kind of appear hidden in the batter!  It sounds like a good reason to me why it would be called toad in the hole, but who knows!

It is thought to be a way of making a meal that would be filling back in the day for larger families when the cost of meat to provide a meal for your family would have been too expensive for a lot of families.  So the batter was cheap and used with some meat, it ended up being a tasty meal that was not too expensive for a family and filled everyone up nicely.  Prior to sausages being used in this recipe, things like kidneys and mutton were used.   The toad in the hole has also just gone by the totally uninspiring name of a meal made with batter with a hole in the middle for meat!  UUm, I think toad in the hole is much more flamboyant and exciting and makes you want to try it, causing no damage to our real life toads!

Toad in the hole recipe

And there you have it! A very simple, plain dish with a yummy batter and some good sausages, giving you a tasty toad in the hole treat.  You can add to it by making a nice onion gravy, but to be honest, it is just so nice on its own.  Also, if you prefer, you can add onions to the recipe and cook them at the same time as you have the sausages in the oven for the first 10 minutes, before pouring the batter over.

For a link to the frog eye salad recipe click here